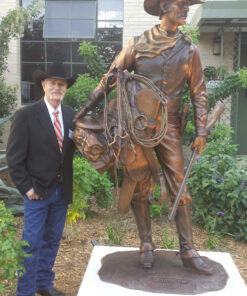 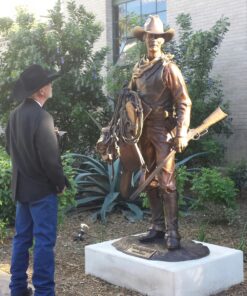 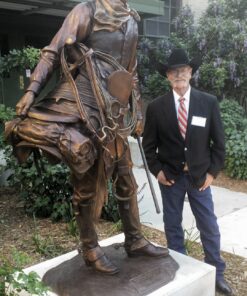 Briscoe Western Art Museum on the Riverwalk in San Antonio, Texas commissioned this sculpture.   The legendary Texas Rangers date back to 1823, when Stephen Austin called for ten men to protect new Texas settlers from Indian raids.  By 1835, the rangers were required to supply their own horses, saddles and firearms. This Texas Ranger, circa 1870, is carrying his ½ seat, double rigging saddle with a Cheyenne roll, developed by Frank Meanea of Wyoming, as well as his Henry Rifle. This Ranger is not wearing the famous star badge, because prior to the 1890’s no official badges were issued, but some rangers created their own from $5.00 Mexican Pesos.  Their legend grew after 1873 when they captured desperados like Sam Bass and John Wesley Hardin, and won decisive victories over the Kiowa, Comanche and Apache tribes. With low and sporadic pay, some rangers hired onto the now legendary cattle drives from Texas through Kansas, Nebraska, Colorado, and Wyoming.  It was often said that a Texas Ranger could, “Ride like a Mexican, trail like an Indian, shoot like a Tennessean and fight like   the Devil, and if you were wanted for a crime they were, The Eyes of Texas.” 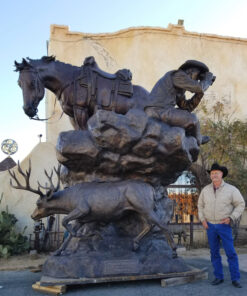 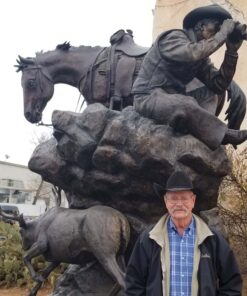 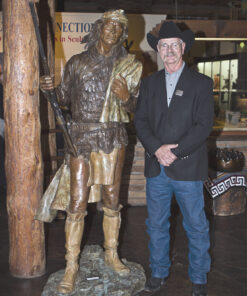 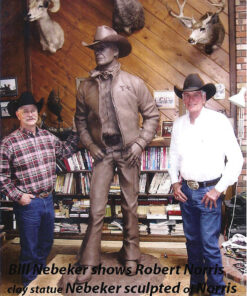 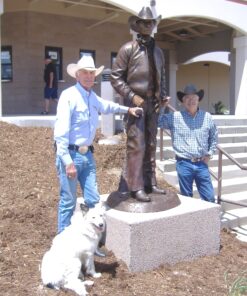 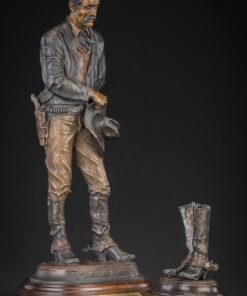