The bronze sculpture of John Wayne was created by Bill in 1974 not only to honor the Duke’s amazing career as an actor, but for the contributions he made as a great American patriot. The piece was controversial, as the Viet Nam war was still a big issue during the 1970’s in this country, and the Scottsdale gallery representing Bill did not want to display or advertise his latest artistic creation. But the Prescott Frontier Days Rodeo convinced the artist to donate one statue to the association for the All Around Cowboy Award.

As it turned out, unbeknownst to Bill, his father-in-law was the chairman on a school board that one of John Wayne’s business partners in a cattle ranch in Southern Arizona was also a member. A request to view the statue was made and an appointment to meet John Wayne at his ranch was set up for Bill and Merry in the fall of that year.

When the meeting took place Mr. Wayne gave Bill and the statue his enthusiastic endorsement by putting his personal signature in each of the 12 wax editions to be cast. He also purchased several of Bill’s other sculptures, and two of Mr. Wayne’s business partners bought copies of the JOHN WAYNE bronze. As a result of the newspaper and magazine articles spawned by this event, Bill became one of the up-and-coming western artists. The sculpture was inspired by the last scene in the movie THE SEARCHERS, where John Wayne is silhouetted alone in a doorway with the wind and sands of Monument Valley blowing his hat and kerchief. Also inscribed on the bronze are the words Wayne wanted on his tombstone, translated from Spanish, “He Was Ugly, Strong, and had Dignity.” The bronze is on permanent display at the National Cowboy & Western Heritage Museum.

The Duke told Bill and Merry an amazing story about the scene Bill had chosen to depict in the sculpture. It had coincidentally marked a turning point in John Wayne’s entire acting career. All through the movie he had been grumbling about being typecast, and tired of always playing the same character. He was passed over for the award-winning roles other actors were getting. Harry Carey, Sr. had been his lifelong hero, and Mrs. Carey played the frontier mother in THE SEARCHERS. She had been barraged by his constant complaining, and took him aside on the very last day of shooting and said, “How would you feel if you went to a movie and saw Harry playing a murderer, rapist or traitor?” John Wayne said,

“I wouldn’t have liked that at all!” Then Mrs. Carey replied, “The people who love and admire you wouldn’t like seeing you do that either, so be satisfied with your movie roles.”

As the last scene of the last day of shooting was wrapped up, he reached over and held his arm in the manner Harry Carey had been known for doing in his scenes. John Wayne copied that stance to let Mrs. Carey know she was right, and he would honor her husband by playing the roles his fans would always appreciate, no matter what the career outcome. 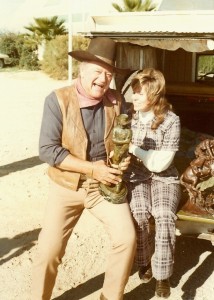 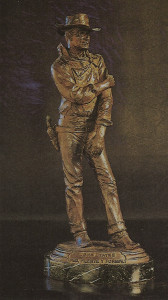